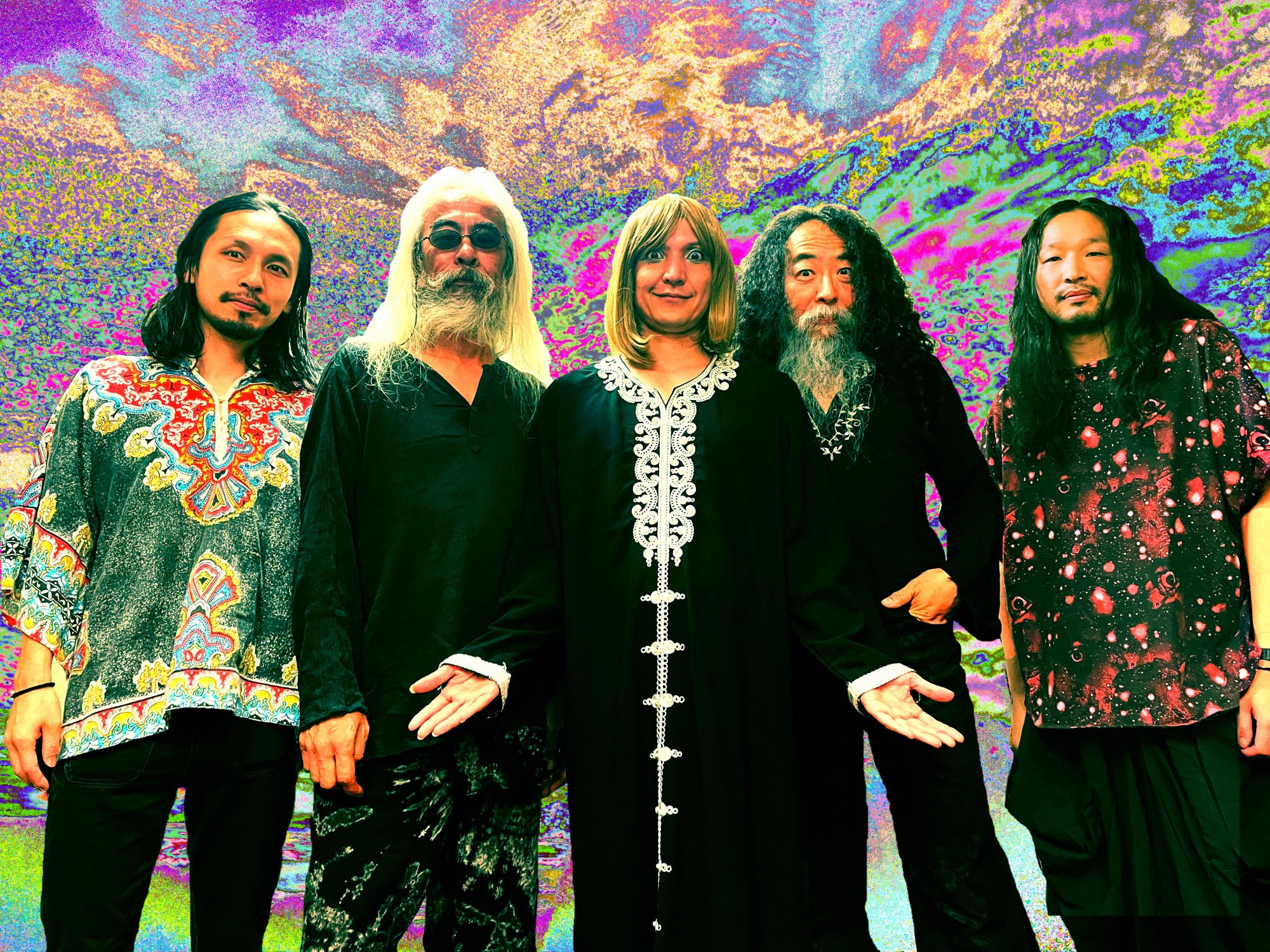 Acid Mothers Temple & The Melting Paraiso U.F.O. Formed in 1995 by Makoto Kawabata at the same time as the Acid Mothers Temple Soul Collective. The group released its debut album in 1997 on PSF Records (Japan), and it was selected as one of the year's best albums in the The Wire magazine (UK). In 1998 the group played their first tours of the US and Europe. Since then the group has released a huge number of albums on labels from many different countries. As of 2017, the group has released around 100 albums. Every year since 1998, they have toured extensively in the US and Europe, and more recently have started performing around Oceania, South America, Asia and in Japan too.  The group has performed in collaboration with many musicians including psychedelic originators Gong and Guru Guru, Damo Suzuki (ex. Can), Simeon (Silver Apples), Nik Turner (Hawkwind), Geoff Leigh (ex. Henry Cow) and the Occitanian trad sinder Rosina de Peira. Japanese collaborators have included Afrirampo, Tatsuya Yoshida (Ruins), Maso Yamazaki (Masonna), Seiichi Yamamoto (Boredoms), Jun Kuriyama (ex.The Ox), Tenniscoats and many others. To begin with the group had a floating line-up with contributions from many members of the AMT Soul Collective. But as tours became more frequent, the group began to coalesce around a core touring line-up. Other bands were created with Acid Mothers Temple as part of their name (AMT & The Cosmic Inferno, AMT SWR, AMT & The Space Paranoid, Acid Mothers Gong, Acid Mothers Guru Guru, etc.), but AMT & The Melting Paraiso U.F.O. has continued to function as the mothership and main lineage for all our activities. In 2016, 21 years since the group's founding, there was a major shift in the line-up and "Next Generation" was added to the name. We now view the first 20 years as chapter one in our story, and we are now turning the page to start chapter two. The current touring line-up is: Makoto Kawabata, Hiroshi Higashi, Nani Satoshima, Wolf and Jyonson Tsu since 2018.   Acid Mothers Temple & The Melting Paraiso U.F.O. : Kawabata Makoto : guitar, synthesizer, speed guru Higashi Hiroshi : synthesizer, theremin, harp, fishing rod Jyonson Tsu : vocal, guitar, bouzouki, midnight whistler Satoshima Nani : drums, another dimension Wolf : bass, space & time
»
NEPTUNIAN MAXIMALISM (BE) (Alternative / No Wave / Doom) 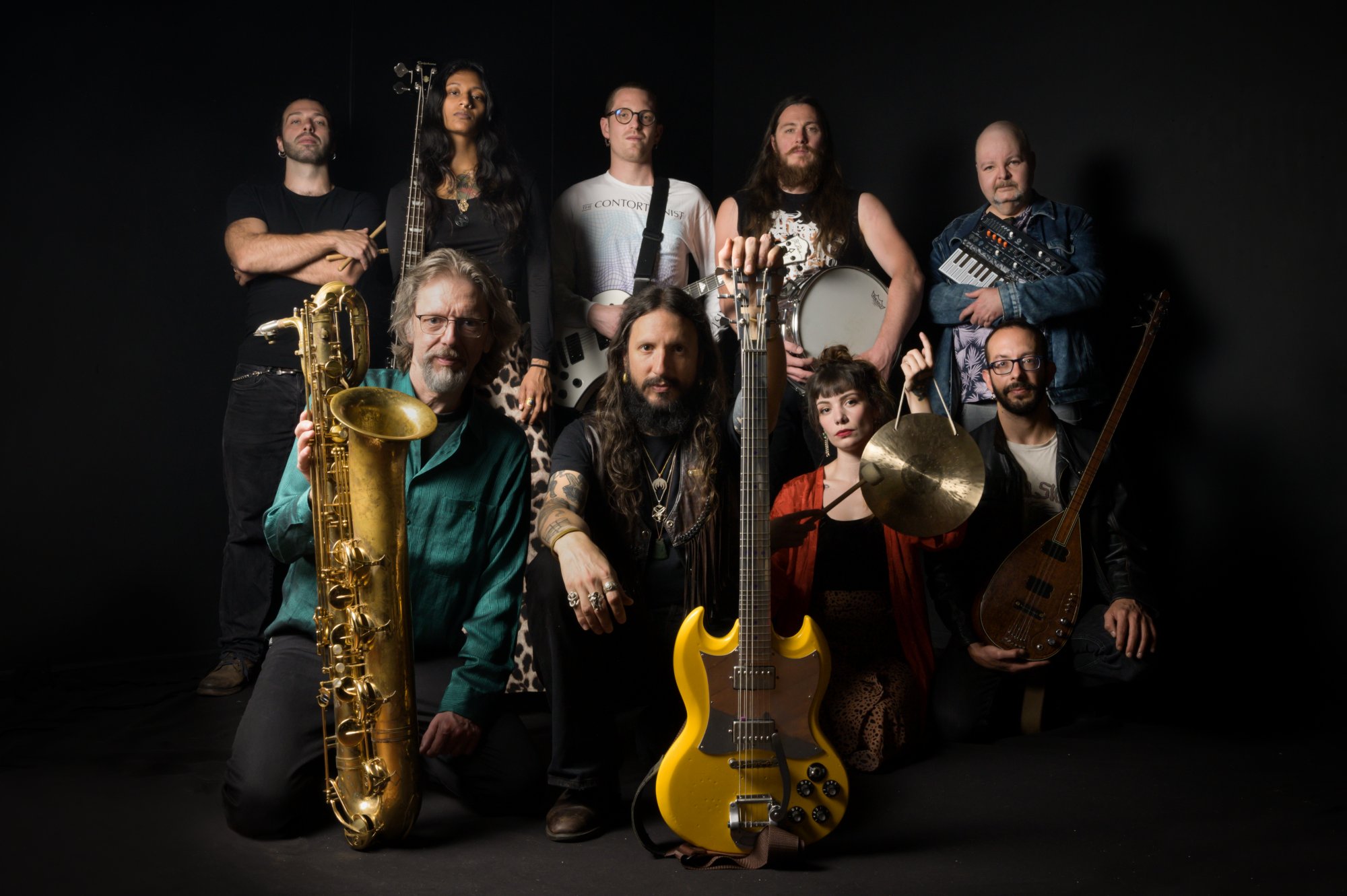 NEPTUNIAN MAXIMALISM, a.k.a. NNMM is a community of multi « occultural engineers » (*Genesis P-Orridge) with a variable geometry/line-up. This project was initiated by Guillaume Cazalet (CZLT ; SOL KIA ; ZAÄAR) and the veteran saxophonist player Jean- Jacques Duerinckx (ZAÄAR ; Ze Zorgs) in Brussels in 2018, especially during a residency with the two drummers Sebastien Schmit (K-Branding) and Pierre Arese (AKSU). The result was a bifacial entity, sometimes calling for a primitive voodoo trance with percussive intonations, dominated by rhythm and a savage movement, sometimes towards a psychedelic meditation with prophetic and spiritual accents resting on an amplified drone music where time is explored, harmony, the power of the tonic and its iridescent harmonics, durability, weight, ruin. From this residency were born a trilogy album called ÉONS released on I,Voidhanger Records, dedicated to the Sun, the Moon and the Earth and a first album, The Conference Of The Stars, released on the label Homo Sensibilis Records, mixing drone metal and spiritual free jazz, animated by a cosmic and psychedelic energy. Between 2019 and 2021, Reshma Goolamy, Romain Martini, Didié Nietzche (48 Cameras, Radio Prague), Joaquin Bermudez (Phoenician Drive), Alice Thiel, Stephane Fedele & Lukas Melville (CUSSD) joined the project that takes the form of an “Arkestra”. Since their last performance at the Roadburn Redux (2021), the collective now purpose several piece of work consisting in various line-ups and multiple sound/space explorations, depending on the venue conditions, like their «Moon Arkestra» (Roadburn line-up), their «Drone Arkestra» (quintet) or their "Solar Drone Arkestra" for exemple. In this way they can maximize their musical researches, following the rules of improvised music consisting in unexpected things. By exploring the evolution of the human species, particularly through the use of speculative texts in Homo-sapiens prototypal language (*Pierre Lanchantin), they question the future of the living on earth. They try to create a sense of acceptance of the end of the "Anthropocene" era through a musical experience.