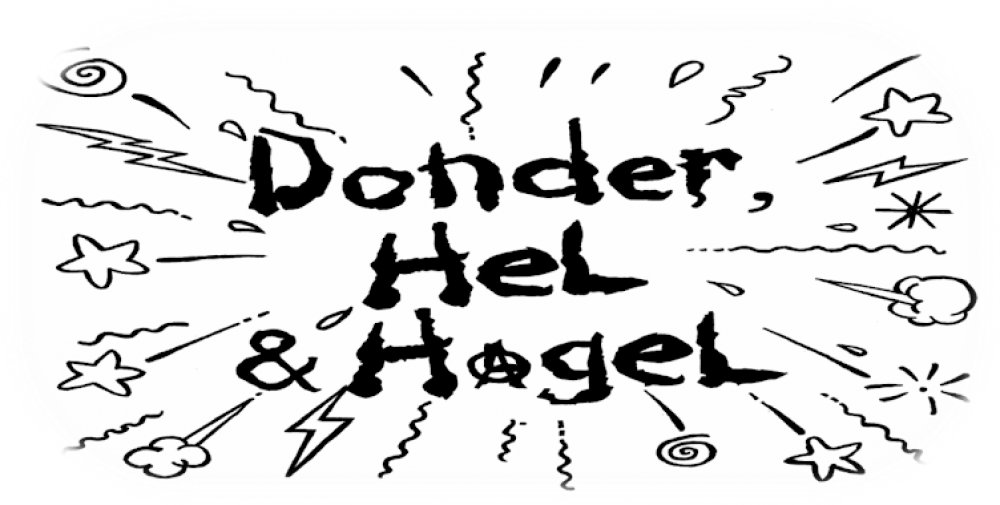 In 2015, after a party on the squatted field “Parkveld” near Leuven, some friends decided to have some jam-sessions together. Out of these sessions, eventually, Donder, Hel & Hagel was born. In april 2017 Bart & Hans did a try-out gig - still without a name - on the reunion-party of Villa Squattus Dei , the squatted autonomous centre (2000-2007), in Leuven. Later on Anton joined them on the bass. Anton Donder, Bart Hel and Hans Hagel  played their first concert together as Donder, Hel & Hagel on 15th of September 2017 in devlovanzenma in Leuven. They’ve toured Europe for 20 years with other bands like: The Usual Suspects, Cop on Fire, Ulrikes Dream, Dead Man’s Hill,… and now they hit the road with Donder, Hel & Hagel. The band name is a swear word from Captain Haddock, known from the Belgian Tintin comic-books. They share the love of shouting idiotic curses and swear words to idiots, including themselves.   Their first youtubeclip “Joke is weer daar” got a lot of press coverage. From the local TV-network to the bigger national newspapers. The clip was recorded in July 2017 - even before their first official gig - and is about the minister of environment Joke Schauwvlieghe giving the transport-company Essers a permit to destroy a forest to build a new storage facility. A lot of action groups fought for the forest and in the end they won their case in front of the court. So for now the “Essers forest” is safe.    On the 11th of november 2017 Donder, Hel & Hagel released their first - DIY home recorded - demo during the Breaking Barriers festival. It contained three songs “Joke is weer daar” , “Il faut travailler” and “De Rekening”. All physical copies have been sold, but you can still download the songs on the bandcamp page of the band. All songs can be found on youtube as well.   In 2018 Donder, Hel & Hagel was asked to play on the “Fiesta Partigiani” festival on the squatted field “Parkveld”. As this place is special to Donder, Hel & Hagel, they decided to write a song about Parkveld and make a video clip to promote the Fiesta Partigiani and to gain publicity for the activists of “Parkveld Blijft”, who have been fighting for this place for more than 20 years. Part of the field is owned by a real estate company who want to build houses for the rich, the other half is owned by the city of Leuven who want(ed) to build industrial buildings. The field was an agricultural space for hundreds of years and has a unique ecosystem. The clip “Parkveld blijft”(parkveld stays) drew attention of the local media and was covered in the newspapers.
»
RESSAC
»
VACANT (BE) (Punk)